Thank you for your interest in membership in the Brittany Club.  There is currently a waitlist from both core and non-core neighborhoods. Below is information on the membership application and approval process as well as Frequently Asked Questions.

We typically discourage people from submitting non-core applications since there is a $100 fee and it’s unlikely that non-core invitations will be extended. It’s been almost 10 years since we extended an invitation to a non-core family. If you have plans to move into a core neighborhood in the future, it may be worth considering applying now and paying the $100 fee. At the time of your move into a core neighborhood, you would be moved to the core wait list according to the date of your first application. Thus, your membership offer could be expedited. Please contact the membership chair with questions about the process. At this time, there is not mechanism for moving higher on the list through donations, volunteerism, etc.

Membership applications shall be derived from two sources: 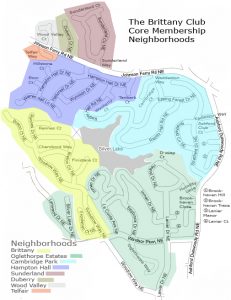 Refer to the Core Neighborhood Map for the addresses considered core.

If there are any questions whether a property is core, please contact the membership chair.  No other interpretations will be accepted including those presented by realtors, tax records, or others.

Non-core are all areas not in the core neighborhood map.  Memberships from these areas are limited to twenty five (25) percent of the maximum number of certificate holders (as set forth in Article VIII, Section 1 of our bylaws).  All non-core applicants must pay a $100 non-refundable and non-transferable application fee.  Any non-core application not accompanied by payment will not be considered.

In the event of an opening in the Club Membership, applicants from the core subdivisions take precedence over all others. Applicants will be considered in the order the applications were received based on date received: oldest date received will be the first application for consideration.

If all authorized memberships are taken when an application is received by the Membership Chair, then the applicant will be placed on the waiting list by category.

Membership will be offered to an applicant after a completed application has been considered and approved by a majority of any quorum of the Board of Directors. Applicants who have been approved will have two weeks from the first date of mailing of written notification (invitation) of approval to pay the initial assessment (initiation fee plus membership fee) set by Board of Directors.